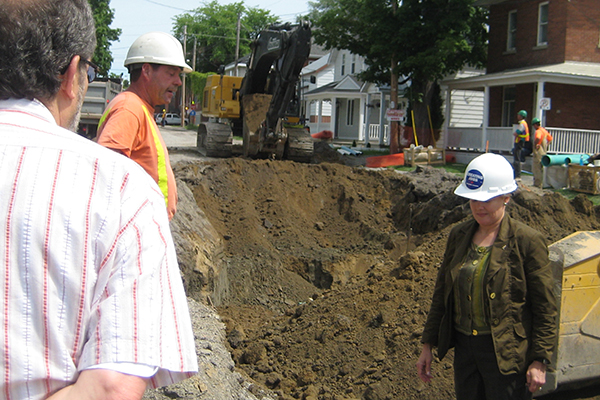 Ottawa, Ontario –  “Municipalities are big winners with this year’s Federal Budget,” stated Cheryl Gallant, MP.  “I am pleased to confirm the creation of The New Building Canada Plan, the largest long-term federal commitment to Canadian infrastructure in our nation’s history. There will be $53.5 billion over the next 10 years for provincial, territorial and municipal infrastructure.”

The plan has three components.  First, the community improvement fund will provide over $32 billion to municipalities for projects such as roads, public transit and recreational facilities. The new fund incorporates the gas tax fund and the incremental GST rebate for municipalities. The gas tax fund portion will be indexed and therefore will increase over time. More importantly the list of eligible categories will be extended to include highways, local and regional airports, short line rail, short sea shipping, disaster mitigation, broadband and connectivity, brownfield redevelopment, culture, tourism, sport and recreation.

“This is welcome news. By providing an expanded list of categories, municipalities can set their own priorities,” observed MP Gallant. “The original plan that was signed by the old government of Paul Martin expected rural municipalities to build transit systems, which was totally unrealistic and not based on the reality of how Canadians travel in rural Canada. We listened to municipalities and gave them more independence to choose the projects that are important to their residents. Since 2006, over 33 million dollars has flowed to local municipalities in Renfrew-Nipissing-Pembroke from the federal government portion of the gas tax, easing the pressure on the local property tax base to complete necessary municipal infrastructure, like roads and sewers.”

“Unfortunately for rural municipalities in Ontario, the current provincial government discriminates based on where one lives. Millions of dollars are collected in provincial gas taxes. Instead of following the leadership of the federal government in maintaining rural public infrastructure, the province  directs the taxes from rural Ontario to such projects as the Toronto subway. I urge the Liberal Party of Ontario to support the Private Members’ Bill put forth by my provincial Conservative colleague, John Yakabuski. His Bill 3 would correct this injustice. Rural people pay gas taxes like everyone else. This is a basic issue of fairness.”

“Renfrew County municipalities should be made aware, the Provincial Minister of Transport wrote to Federal MPs as part of our budget consultation process, suggesting our federal government use the provincial model of distributing gas tax funding. I am pleased to confirm we rejected that advice and in fact enhanced the federal gas tax transfer. In that same submission to the federal government, I am very disappointed to report to the people of Renfrew-Nipissing-Pembroke the Liberal party of Ontario chose not to include the twinning of Highway 17 from Arnprior to North Bay in its 10 year plan for Infrastructure improvements in the Province of Ontario.”

“Other good budget news is the second component of the Building Canada Fund, which will provide $14 billion to support major projects across the country, and a third component, the P3 Canada fund, which will provide $1.25 billion to continue to support innovative ways to build infrastructure projects faster and provide better value for Canadians. All Building Canada Plan projects with capital costs of more than $100 million will be screened for P3 potential. This represents an opportunity for Renfrew County to propose a creative funding solution to finish Highway 17,” concluded Cheryl Gallant, MP.