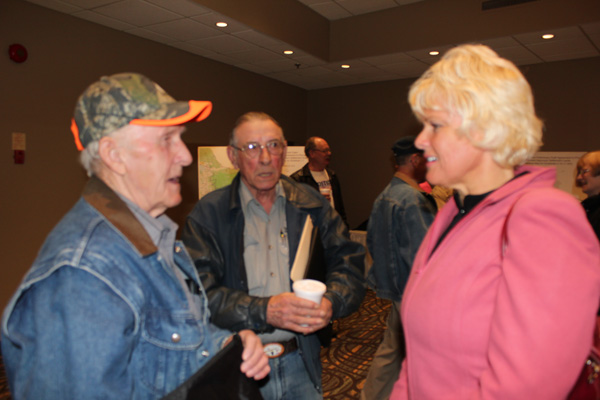 Cheryl Gallant, MP hearing the concerns of Frank Foy and Gord Trylinski at the ALC meeting

Pembroke, Ontario – Cheryl Gallant MP, Renfrew-Nipissing-Pembroke, is pleased to thank all those individuals who participated, either as presenters or participants in the process, in the latest Algonquin Preliminary Draft Comprehensive Land Claim Agreement-in-Principle (ALC) consultation. The outstanding issue of access to traditional hunting grounds on Crown Land on the part of non-aboriginals remains high on the minds of sportsmen.

“The more dialogue that occurs between the Algonquins and residents who are affected by the ALC, the greater the understanding for each other’s position,” stated Cheryl Gallant, MP. “For example, it was explained that aboriginals already, through a variety of court decisions, have the right to hunt & fish as much as they want, whenever they want, however, they want.”

“People have been given the impression by others that it is the ALC that is giving the Algonquins this right. In fact the agreement-in-principle outlines conservation measures to be implemented. As it now stands, if an aboriginal is charged with poaching, the case goes before the court for a ruling that requires a burden of proof which makes enforcement difficult and legally expensive with poor results. Algonquins on the other hand, want the principle of conservation enshrined in the treaty.

“It was explained the Algonquins of Pikwakanagan at Golden Lake is the only band in Ontario that has implemented a moose tag system for its members. Presently the system is voluntary. There is no law. The treaty would make the system legally enforceable,” observed MP Gallant. “Many were surprised to learn that the Algonquins would like to enforce their tag system. That is only common sense as it’s in their interest to keep the herd levels sustainable. Currently the OPP prevent the Algonquins from enforcing the limits on their moose tag system.”

“A number of stakeholder groups have dismissed these information sessions as for show only. Current experience with the provincial Endangered Species Act justifies some of those concerns. However, in the case of these forums, be they one on one or in a group, the comments will be taken back to the negotiating table prior to the Agreement in Principle being put before the Algonquin Members for a vote. This will be a true consultation, not the kind that rural people are used to from Toronto where the concerns of rural residents are ignored.”

“The Federal Government is committed to an open, transparent treaty making process. I encourage local residents to continue to let me know their concerns. I will ensure that our Federal Negotiator represents their concerns before the ALC is completed,” concluded Cheryl Gallant, MP.