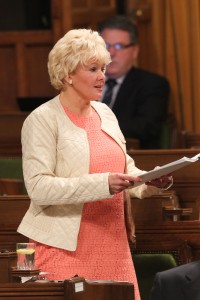 Ottawa, Ontario – Cheryl Gallant, MP Renfrew-Nipissing-Pembroke has confirmed her introduction of Motion 439 to privatize the functions of the Canadian Firearms Registration System for restricted and prohibited firearms.

“Now that our Federal Conservative Government has fulfilled its promise to scrap the wasteful, Liberal billion dollar long-gun registry, we need to look at other ways to save taxpayers’ dollars. In addition to saving tax dollars, privatizing the functions of the Canadian Firearms Registration System for restricted and prohibited firearms has a number of other advantages,” observed Cheryl Gallant, MP.

“It would eliminate the costly duplication of having each province managing a separate bureaucracy to administer the firearms registration system. Law-abiding sportsmen, hunters and farmers would benefit by having one set of rules rather than the provincial patchwork that currently exists. Additionally, by privatizing the functions, as a civilian agency the office would become administrative and service-oriented, to the benefit of all Canadians,” said MP Gallant.

“In a recent expenditure analysis of criminal justice in Canada, the Parliamentary Budget Office (PBO) identified provincial criminal justice costs as the largest contributor to rising public expenditures on criminal justice in Canada. At the same time the PBO categorized firearms programs as fully dedicated to crime when in fact the firearms registry is an administrative procedure. By transferring administrative tasks to a service-oriented civilian agency, law enforcement professionals’ valuable time can be re-directed to more useful tasks such as front-line policing,” stated Gallant, MP.

“The good thing about this change is that because it is administrative, legislation may not be required. Also, since the Federal government is paying the provinces to administer the registry, the Federal Government will be able to apply the savings to directly reduce that part of the Federal deficit that was caused by the expensive, wasteful Liberal long-gun registry in the first place.”

M-439 — April 11, 2013 — Mrs. Gallant (Renfrew—Nipissing—Pembroke) — That, in the opinion of the House, the Minister of Public Safety should, with the approval of the Governor-in-Council, rescind the existing agreements with the governments of the provinces and amend Section 95 of the Firearms Act to privatize the functions and operation of the Canadian Firearms Registration System, in recognition that the Parliamentary Budget Office has identified:

(b) policing expenditures categorized as fully dedicated to crime includes firearms programs when in fact they are non-criminal and should be administered as such; and

(c) law enforcement professionals spend too much time on administrative tasks at the expense of front-line policing.

Watch Cheryl In The House