Cheryl Gallant rises in support of Canadians with disabilities 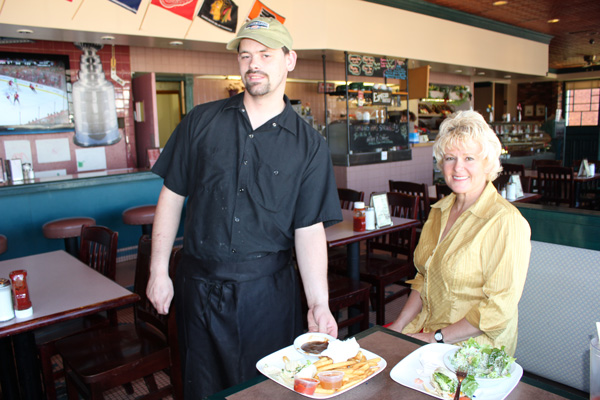 Ottawa, Ontario – Cheryl Gallant, MP for Renfrew—Nipissing—Pembroke was delighted to speak in support of a Private Member’s Motion introduced by colleague, Phil McColeman, M.P. for Brant.

Motion M-430 endorses the conclusions of a report prepared by the Panel on Labour Market Opportunities for Persons with Disabilities.

The report, Rethinking disAbility in the Private Sector, outlines both opportunities and employment challenges faced by persons with disabilities.

“Since Motion 430 was announced, support has poured in from many sources—from individuals and businesses, large and small. An opportunity for meaningful employment gives those living with disabilities dignity and independence,” said MP Gallant.

“Businesses across the country identified Canadians with disabilities as among their most dedicated and loyal employees.  Locally, in Renfrew Nipissing Pembroke, Nick Kastanis, the owner of Fresco Restaurant in Pembroke employs Jeffrey Shand.  Jeffrey is an eager, dedicated employee there, who began work for this establishment over 12 years ago” stated Cheryl Gallant, M.P.

“In Economic Action Plan 2013, our government has begun to address some of the aspects raised by this motion.  The budget announced a new generation of Labour Market Agreements for Persons with Disabilities. These new agreements will be designed to better meet the needs of Canadians businesses and improve the employment prospects for persons with disabilities.”

Other measures include a new focus on young people with disabilities through programs such as the Youth Employment Strategy, improvements to existing labour market agreements, along with new approaches to ensure that our programs are adaptable.

The Labour Market Panel also announced the creation of the Canadian Employers Disability Forum, an initiative which will be managed by employers, for employers.

“We need to be able to capitalize on innovative strategies happening at the community level across the country,” remarked MP Gallant.

Speech from the House

Mr. Speaker, it is a privilege for me to rise in support of my colleague’s motion to endorse the report “Rethinking DisAbility in the Private Sector” by the panel on labour market opportunities for persons with disabilities.

The motion could not come at a better time. Like all industrialized nations, Canada is facing a demographic challenge to our labour force. There is an existing skills gap and the retirement of the baby boomers has yet to start in earnest. The skills shortage has been characterized as the most serious economic issue of our time by both the Prime Minister and the Canadian Chamber of Commerce. To illustrate this problem, let me give a few examples.

There are about 800,000 working-age Canadians with disabilities who are currently not working, even though their disability should not prevent them from being employable. Of these, almost half of them have post-secondary education, yet the participation rate for working-age people with disabilities in the labour market is just under 60%, compared to working-age Canadians at 80%. This means that even with the large number of job vacancies the unemployment rate among disabled remains very high.

We have all heard stories about businesses that are struggling because they cannot find workers with the right skill sets. Many of us know qualified people with disabilities who cannot find work.

When members of the panel on labour market opportunities for persons with disabilities consulted across the country to prepare the report, they interviewed employers from businesses of all sizes and from a broad range of industry sectors. What they found was that most Canadians showed a genuine desire to hire people with disabilities. They get it because they have seen the positive results that hiring people with disabilities brings, both in terms of company culture and increasing their bottom line. When a person with a disability gets a job they get more than a paycheque. They get a boost to their dignity and independence.

Since Motion No. 430 was announced, support has poured in from many sources, from individuals and businesses, large and small. For example, let me quote Chris McIntosh, who is a software developer who has been diagnosed with Asperger’s syndrome. When Chris heard about the motion, he said, “People want meaning in their lives. They spend so much of their lives at work. Employers who provide meaning to their employees have a motivated and loyal workforce and nothing is more meaningful than changing the life of another person.”

Yet the myths persist. Some think that hiring people with disabilities is expensive, and this is totally false. It often costs little or next to nothing to accommodate someone who has a disability. The panel’s report cites that in 37% of the cases where there was a one-time cost to accommodate an employee with a disability, the average amount spent adapting the workspace was only $500.

The motion calls for additional initiatives that would build on this support. They include a new focus on young people with disabilities through programs like the youth employment strategy and improvements to existing labour market agreements, along with new approaches to ensure that our programs are adaptable.

We need to be able to capitalize on innovative strategies happening at the community level across the country. In economic action plan 2013, our government has begun to address some of the aspects raised in the motion.

Other measures were also announced in Canada’s economic action plan. Additional funding will be provided through the Social Sciences and Humanities Research Council, some of which will support research related to the labour market participation of people with disabilities.

The creation of a Canadian employers disability forum was announced, as recommended by the panel. The forum, an initiative led by a number of Canadian businesses, including Loblaws, will be managed by employers for employers. It will facilitate the education, training and sharing of resources and best practices concerning the hiring and retention of persons with disabilities. Under the leadership of the forum, employers will help promote and further the invaluable contributions persons with disabilities can make to their businesses.

Finally, the budget announced an extension of the enabling accessibility fund on an ongoing basis to support the capital costs of construction and renovations to improve physical accessibility for people with disabilities. Unfortunately, the opposition parties chose to play political games and voted against that initiative. It is unfortunate that the NDP and Liberals cannot support these great investments and programs for persons with disabilities who need to find meaningful employment.

There is more to be done. In particular, we must change our focus to increase awareness among the owners of small- and medium-sized businesses.

As I said earlier, the introduction of this motion could not be more timely. We are at a pivotal moment in Canada when it comes to our workforce. With baby boomers starting to retire, we need to ensure that all of our talent is at work contributing to continued prosperity. Part of addressing this issue involves investing in people, people with disabilities, so that they can reach their full potential. This includes strategies to attract and retain people from under-represented groups, such as people with disabilities.

In a report by the OECD Business and Industry Advisory Committee published this year, the committee said:
With aging populations and emerging skills shortages, effective talent management is a dominant business issue, and a strategic imperative.

We urge businesses of all sizes to step up to the plate and consider new sources of labour as part of their human resources strategy. I was delighted to see that the Standing Committee on Human Resources, Skills and Social Development and the Status of Persons with Disabilities is conducting a study entitled “Exploring Employment Opportunities for Persons with Disabilities”.

In conclusion, I would like to congratulate the member for Brant for taking the initiative and introducing this motion. I would also like to thank the members of the panel on labour market opportunities for persons with disabilities for a job well done. Finally, I would like to ask all members of the opposition parties to put aside political games. It is unfortunate that they voted against the investments that would help Canadians with disabilities fully participate in our economy, and I hope they can find it in their hearts to support this member’s motion.