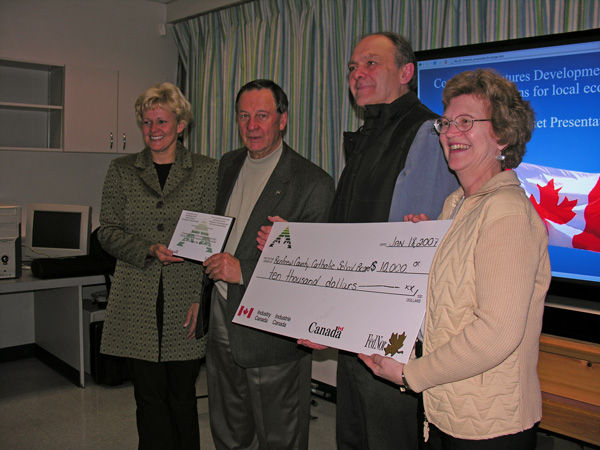 Local residents know that broadband, affordable high-speed internet, is something that I have championed on behalf of underserviced residents of our riding. As your government MP, I was pleased to help deliver, with my government caucus colleagues, $55 million from the federal government, to be used in partnership with industry and other levels of government to provide that service in Eastern Ontario.

While providing the network is important, promoting consumer protection in the wireless industry is equally important.

This week, the Government of Canada proposed a new wireless code, which will help protect Canadians while giving them greater choice and opportunity with respect to cell phones.  This code, which will be enforced by the Canadian Radio and Telecommunications Commission (CRTC), will set out basic rights and protections for Canadians and small businesses with cellphones, smartphones, and other wireless mobile devices.

The new wireless code will take effect December 2nd, 2013, and will only apply to contracts bought after that date.

Thank-you to the Ottawa River watchers who have have contacted me asking why the price of electricity keeps rising, yet the provincial government has instructed their bureaucrats to let the Ottawa River slop over the power dams rather than generate clean, environmentally safe, hydro electricity. In addition to wasting electricity, they have observed this causing environmental destruction of fish spawning beds and bird nesting sites, in addition to flooding of private property.

While the Federal Government has legislation in place to ensure the Ottawa River is a navigable waterway, that legislation does not allow your federal Member of Parliament to hold the province  accountable for their actions where they have assumed responsibility. In many instances, agreements signed in the past, and subsequent court interpretations of what may or may not have been the will of the people through Parliament, prevent our government from taking action.

This is one of the challenges I face as your Federal MP  when I am called upon to correct a problem which is at another level of government. It has become a bigger problem when jurisdiction is unclear or shared. Please be assured that where possible, I will use all the resources of my office to assist you regardless of where the problem originates.

As your Federal Member of Parliament, I am pleased to represent you on a variety of issues. Whether that issue is eliminating the long gun registry, promoting agriculture, international trade, AECL, the military or jobs in the working forest, I am here to serve you! As always, if you have any concerns of a federal nature, or just want to share your views with me, please do not hesitate to contact my office.

Our Government is committed to promoting consumer protection in the wireless industry through the new wireless code, and ensuring that at least four providers service each region of the country.