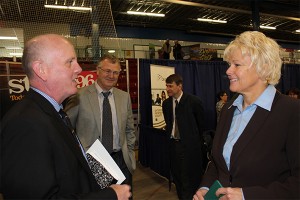 “As one of the companies that have expressed an interest in a public/private partnership with the Chalk River National Laboratory, it gives me great pleasure to welcome Babcock and Wilcox Canada Ltd. to the Upper Ottawa Valley. I understand the company is opening an office in Deep River. There will be a community welcome reception at the local Yacht and Tennis club following the ribbon cutting ceremony,” said Cheryl Gallant, MP.

Innovation Valley North in the Ottawa Valley is the combined synergy of the Defence and Nuclear industry clusters as well as the historic Ottawa Valley lumber producers that are currently operating, coming together to respond to the various initiatives announced in budget 2013. Their combined synergy has the potential to create new employment and sustain existing jobs as our local economy positions itself to take advantage of such budget measures as the almost $1 billion in the Strategic Aerospace and Defence Initiative (SADI) to enhance the competitiveness of Canada’s economically important aerospace and defence industry, which includes businesses like Allen-Vanguard Inc. in Pembroke.

By encouraging new Innovations in Canada’s Aerospace Sector through the creation of the Aerospace Technology Demonstration Programs ($110 million over five years, beginning in 2014-15, and $55 million each year after), we will support large-scale technology projects with commercial potential for companies like Magellan Aerospace in Haley Station and Arnprior Aerospace. Critical to the “Innovation Valley” is the hub, the ideas generator that turn in to new employers. In the upper Ottawa valley we are very fortunate to have two hubs that form the nucleus of Innovation Valley North. The first hub is the Chalk River Laboratories of Atomic Energy of Canada. The second hub in the upper Ottawa Valley is CFB Petawawa. Our government is committed to providing our men and women in uniform with the best equipment to do the many tasks we ask them to do on our behalf. It only makes sense for defence procurement to support economic opportunities for all Canadians.

The process of modernization at the Chalk River Laboratories is moving forward to a Government-owned, Contractor operator (GoCo) governance model. A Government Owned Contractor Operated (GOCO) model of governance, following the U.S. and British practice, provides for a proven, cost effective, high accountability approach to management and operations of a national laboratory. A GOCO partnership shares the risk between government and the private sector. It allows each partner to perform duties for which it is uniquely suited: the government establishes mission areas and sets performance targets; and the private sector implements the missions using best business practices that ensure simultaneous excellence—excellent technology solutions delivered by the best scientists, engineers and managers; excellent operations, protecting employees, the public and the environment; and excellent community involvement, contributing to important economic needs.

A comprehensive program of technology transfer and commercialization implemented by the Chalk River National Nuclear Laboratory would sustain, attract and/or create companies and employment in the upper Ottawa Valley as a technology research and development hub. Innovation Valley North in the upper Ottawa valley is a partnership, taking advantage of the AECL platform of knowledge, assisted by many initiatives announced in Budget 2013.

“I welcome all serious bidders to pursue the opportunity that exists with a public/private partnership with the AECL Chalk River Laboratories, to step forward now and take advantage of Innovation Valley North. Many welcoming communities exist like Laurentian Hills, Pembroke, Petawawa, Renfrew Barry’s Bay and Arnprior in addition to the Town of Deep River. Each would be an ideal location to open an office or manufacturing facility,” concluded Cheryl Gallant, MP.