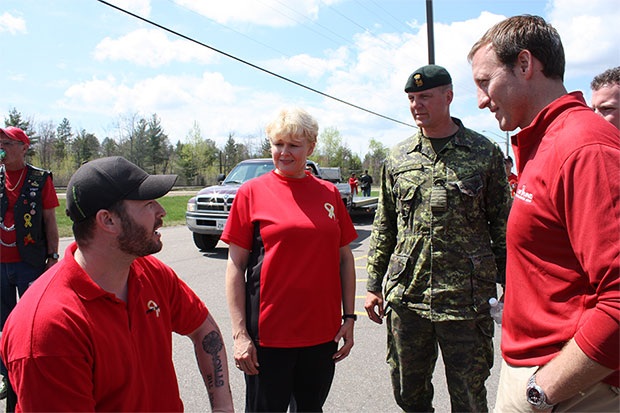 Pembroke, Ontario – As the Member of Parliament for Renfrew-Nipissing-Pembroke, that includes CFB Petawawa, I am pleased to confirm the announcement of new legislation intended to provide medically released Veterans of the Canadian Armed Forces (CAF) who were injured in service to Canada the top level of priority consideration for job openings in the public service.

Medically released Veterans have made a significant sacrifice in their service to Canada and they have the skills, training and experience that make them ideal candidates to continue strengthening Canada through public service.

When a position becomes open in the public service, different groups have different levels of access. In spring 2014, when the legislation is expected to come into force, those Regular Force and Reserve Force members who are medically released from the Canadian Armed Forces for service-related reasons will receive a statutory priority for a period of five years. This will provide Veterans with the highest level of priority consideration for public service positions, above all other groups, in recognition of their sacrifices and service to Canada.

Those full-time Regular or Reserve Force Veterans who release for non-service-related medical reasons will continue to receive their existing level of priority. However, the duration of their access will be increased from two to five years, allowing them a longer period of priority entitlement for positions.

Veterans who will make use of this measure must qualify for the positions they are seeking. The changes will apply to medically released Veterans who received a priority entitlement on or after April 1, 2012. In addition to the proposed legislative and regulatory changes, the Government of Canada continues to work with corporate Canada to help Veterans find new opportunities to successfully make the transition from military to civilian life. Partnering with corporate Canada allows Veterans to put the training and skills acquired during their service to good use in the civilian workforce.