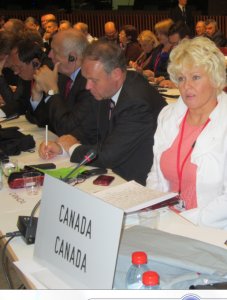 “Our Latvian hosts were extremely pleased the meeting was being held at this juncture in time, and this was underscored by the interest the media took in the event. The Head of Delegation for Latvia expressed his profound gratitude to Prime Minister Stephen Harper for leading the world in taking a strong stance against the Russian aggressions,” stated Cheryl Gallant, MP.

“The lesson learned from Russian hostility in Crimea is that the world continues to be a dangerous place,” observed MP Gallant. “It is naïve and simplistic on the part of the Liberals and the NDP that Canada should disarm our military, now that the mission in Afghanistan is over. We cannot return to the liberal policy of the “Chretien lost decade” when our military suffered severe equipment shortages.”

“The first topic of discussion was the deteriorating situation in Ukraine. The leaders of the NATO Parliamentary Assembly (PA) affirmed their support for Ukraine’s territorial integrity and withdrew the Russian Parliament’s Associate Membership of the Assembly.”

NATO PA President Hugh Bayley (United Kingdom) stated: “The decisions of both Houses of the Russian Parliament to authorise President Putin to use military force in Ukraine, and to ratify the illegal annexation of Crimea, make it impossible for our Assembly to maintain normal relations with Russian parliamentarians. Dialogue depends on mutual trust and that trust has broken down.”

“The Russian government’s aggression in Ukraine and its rush to annex Crimea show its flagrant disregard for international law and its treaty obligations. These actions undermine 25 years of painstaking efforts by the NATO Alliance to build a strategic partnership with Russia. Worryingly, it is still not clear whether Russia intends to make further violations of Ukrainian territorial integrity,” stated Cheryl Gallant, MP.

“The Russian presence in Ukraine has created disorder. Russia is ready to break all international rules, treaties, and use force. Allowing Russia to take over Crimea is seen by some as a failure in co-operative security. Ukraine did not request NATO intervention. As a consequence of anti-NATO campaigning on the part of the Yanukovich government, it was felt to do so would cause bloodshed. Russia will not retreat from its position. With its invasion of Georgia in 2008, and Ukraine in 2014, what is next remains a question.”