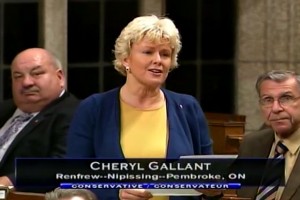 Ottawa, Ontario – Cheryl Gallant, MP Renfrew-Nipissing-Pembroke is pleased to confirm the introduction of Bill C-618, An Act to Amend the Lobbying Act (reporting obligations), to be read as the Foreign Lobbying Transparency Act.

“I introduced this legislation to protect local jobs,” stated MP Cheryl Gallant. “We saw the dangers of large sums of money being used by special interest groups to influence the last Ontario Provincial election. This legislation is also about protecting democracy in Canada.”

“The legislation is all about following the dollar, in this case to foreign capitals with very un-Canadian agendas.  I am proud to be Canadian. All Canadians have built something very special in this country. Any time there is a national discussion, Canadians have a right to know whose voice is being heard and why.”

“The purpose of this legislation is to provide for greater financial transparency in how lobbyists are being funded for their activities. One of the areas that the Commission of Inquiry into the Sponsorship Program and Advertising Activities looked into was “government relations,” commonly referred to as lobbying. As a result of those corrupt activities, our Federal Conservative Government brought in the toughest anti-corruption legislation in democratic countries.”

“Canadians have been made very aware that foreigners have been secretly funding single or special interest groups whose lobbying efforts do not enjoy the support of regular hard-working Canadians. Many of these groups could not exist without foreign funding.  For example, in my riding of Renfrew—Nipissing—Pembroke, thousands of hard-working Canadians depend on their livelihood from the working forest.”

“Misinformation jeopardizes those jobs. Canadians have a right to know the sources of funding for those groups that seek to take away jobs from Canadians.  The Foreign Lobbying Transparency Act would achieve financial transparency and improved accountability through the public reporting of payments made by foreigners to lobbyists,” concluded Cheryl Gallant, MP.