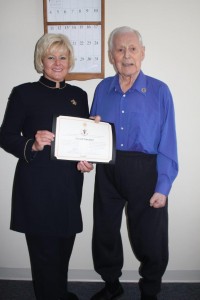 “In commemoration of his service to our country in the Second World War, it is my pleasure to present Harold Gutzman with this Tribute,” said MP Gallant. “The Canadian Army spearheaded the allied liberation of the Netherlands in 1944 and 1945, almost singlehandedly driving the German forces from the country. To this day, Canada and the Netherlands share a special connection thanks to the efforts of soldiers like Harold Gutzman.”