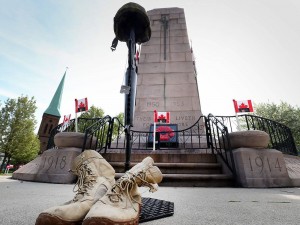 The Trudeau Government is unnecessarily putting soldiers’ lives at risk for the sake of a few publicity photos.

Military families were horrified to read details in the press that would not have been disclosed by our Conservative government, nor should they be. We understood that the bad guys can read just as well as Canadians.

As the MP whose riding includes Garrison Petawawa, those were my comments on the controversial decision by the Trudeau Government to compromise operational security for publicity reasons in the war against international terrorism. Not only is the Trudeau Government allowing Canadian Special Forces to be interviewed and have their faces photographed, they are allowing the publishing of details that compromise the safety of the families of serving Canadian soldiers.

Families in Canada need to be protected from the threat of retaliation by the Islamic State. Promoting the mission to combat ISIL by setting aside operational security for a few publicity photos is wrong.

It is stressful enough for the soldiers who are deployed. They should not have to worry about their families in Canada. The families do not need this stress either.

The decision to compromise operational security follows the controversial decision to withdraw fighter jet air support to protect our troops in combat.

If air support was necessary for the soldiers who were deployed by our Conservative government, then more air support, not less, is required for the additional soldiers who are being sent into combat in Iraq. The government has publicly stated that somehow the lack of air support is compensated by placing more soldiers on the ground, a position that strategically makes no sense.

This is not the first time a Liberal government has made a politically expedient decision on the backs of serving women and men in the Canadian Armed Forces. The decision by a Liberal government to cancel the Sea King helicopter replacement contract cost lives as well as money. In addition to being on the hook for half a billion dollars in cancellation fees, Canada ended up purchasing an inferior commercialized version of the same helicopter with no industrial benefits to Canada. Those benefits would have come to Canada if the Liberal government had not interfered or cancelled the military procurement.

Now it appears history is about to repeat itself once again with the decision to purchase an obsolete fighter jet to replace the jets the government refuses to deploy to protect our soldiers on the ground in the international war against terrorism. Soldiers’ lives are unnecessarily being put at risk.