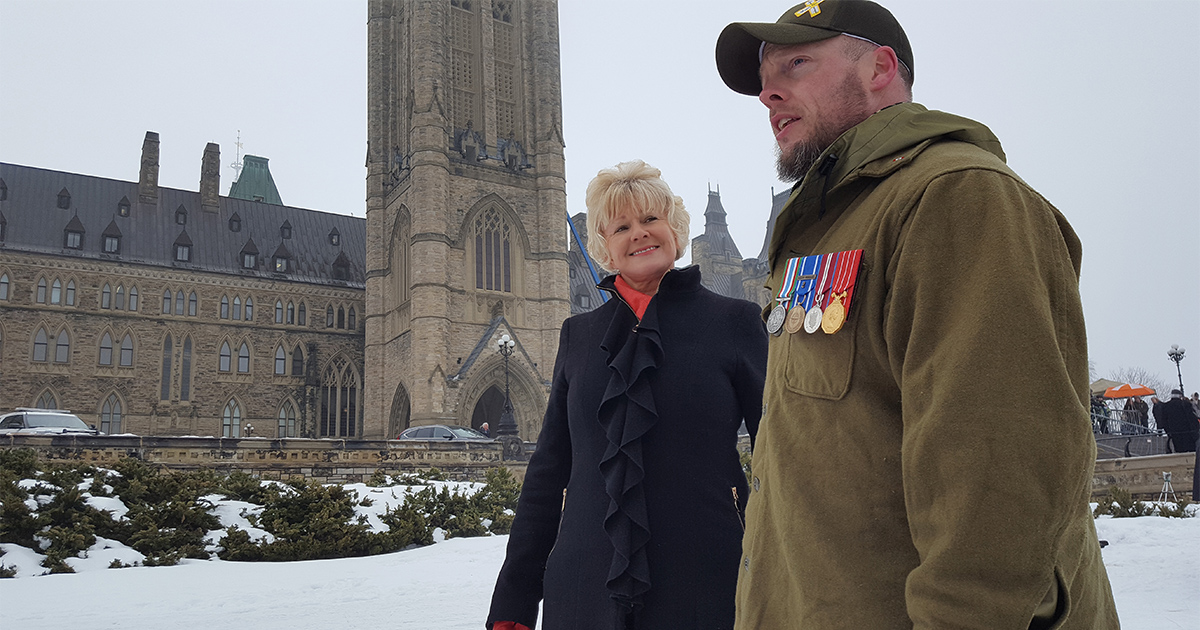 Today I joined Canadian Veterans on Parliament Hill who have been ‘left in the cold’ by the Trudeau government.

The Liberals have repeatedly shown they cannot be trusted to address the issues affecting veterans.

They have not honoured the promises they made to veterans during the 2015 election campaign.

Trudeau promised Canadians if they voted for him, he would re-establish lifelong pensions for injured veterans.

Our Veterans are tired of being left in the cold with lengthy wait times for claims, being talked in circles with no answers, or buried in bureaucracy and paperwork.

Conservatives believe that our military veterans deserve the utmost respect for their service to our country and the sacrifices that many have made while in uniform.  It is imperative that our elected officials lead by example in demonstrating this respect.

The Canadian Press reported last fall that the number of veterans waiting to find out if they qualify for disability benefits has topped 29,000 — a 50 per cent increase since March of last year.

Trudeau promised that veterans would never be forced to fight their own government for the support and compensation that they have earned.

Trudeau promised to make it easier for veterans to access services.

Under his watch the number of veterans waiting for disability benefits has ballooned.

Disabled veterans are losing their case managers due to Liberal policy changes.

Trudeau stated veterans are asking more than we can give and yet has no trouble paying over 10 million to a convicted terrorist, whose sole aim was to murder our men and women in uniform.

Canadian veterans were left in the cold the first time when the Liberals brought in the New Veterans Charter in 2005.

Veterans are being left in the cold again. In terms of pain, suffering, and incapacity payments, most if not all veterans who qualify for such benefits under the new policy will receive less than under programs currently available.

Only 152 veterans have received the Critical Injury Benefit out of more than 62,000 recipients of the lump sum. Government estimates only six veterans per year will qualify going forward.

In the last federal election, Veterans were lied to, to get their vote.

It is Trudeau’s responsibility to keep his promises to veterans during the 2015 election, and to apologize for his disrespectful comments.